Heavy-duty vehicles presently account for 17% of total CO2 emissions. In order to meet European Union’s goal to reduce greenhouse gases by 20 percent by 2020, it is paramount to improve global efficiency of heavy-duty vehicles. One way to achieve this, which is being explored, is to have heavy-duty vehicles drive in a so-called platoon (trucks interconnected through vehicle-to-vehicle communication running at a very close distance). When the heavy-duty vehicles drive with sufficiently close proximity, the aerodynamic drag for the remaining vehicles (besides the leading vehicle) is reduced to a level allowing a fuel saving of more than 2% per vehicle.

However, when several heavy-duty vehicles are to drive in a platoon for a longer distance it requires substantial coordination to operate and create the platoons. COMPANION was a three-year European Commission research project (FP7, 2013-2016) aimed at identifying means of applying the platooning concept in practice in daily transport operations.

The project developed a real-time coordination system to dynamically create, maintain and dissolve heavy-duty vehicle platoons. The platooning decisions were taken given available information regarding weather conditions and state of current traffic within the road network. To facilitate multi-platoon routing, a set of models were set up, computing the most efficient route per vehicle and per platoon. This required very high performance computing engines, as the parameter set was extensive when longer platoons were considered (100+ vehicles).

The resulting dynamic platoon coordination system routes individual heavy-duty vehicles, with various origins and destinations, into a series of platooning operations within the available road network, where each platoon corresponds with the optimal road conditions (given current weather and traffic forecasts) and gives the optimal fuel savings per vehicle for that particular road segment (given slope angle and other road features). The platoons are created dynamically, based on changes in the road network observed simultaneously. The heavy-duty vehicles are instructed to merge into sub-platoons or split when these operations create the optimal platooning conditions. This means that every segment of the route is examined for possible platooning or sub-platooning operations, and the vehicles will only enter into such a platoon if this results in optimal fuel saving conditions whilst still meeting the delivery deadline requirements and other transport task requirements.

The project has also examined the best ways to provide information in a graphical display to the heavy-duty vehicle drivers regarding where they can join and leave platoons, as well as suggested common regulations for the EU that would permit shorter distances between trucks in the platoon. 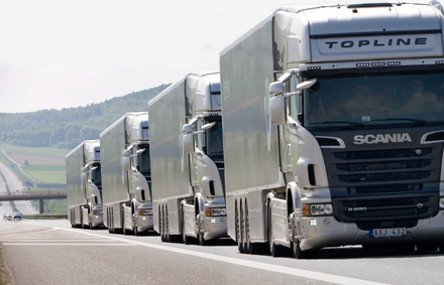 The system was successfully demonstrated on Spanish roads during autumn 2016.