The 2010 volcanic eruption of Eyjafjallajökull affected millions of air travelers over a period of weeks. An eruption of similar magnitude and proximity to heavily traveled routes would create a similarly large group of travelers who require access to current ash data and affected flight routes and airports. Although such massively disruptive events are rare, smaller eruptions in the Aleutian island chain frequently affect trans-Pacific air routes, while Central American eruptions often affect air travel over that region. There is no comprehensive data source on the number of flights affected annually by volcanoes.  However, the International Air Travel Association (IATA) estimates that the 2010 Icelandic eruption affected over 10 million travelers in total.  Smaller eruptions affect hundreds or thousands of passengers around the world. For example, in 2011 the eruption of Grímsvötn in Iceland affected over 3000 flights and tens of thousands of passengers.

The regional VAAC (Volcanic Ash Advisory Center) websites makes available information on ash data and alerts which are provided to air traffic controllers and pilots. However, this information is only accessible via a non-mobile website and is presented in a format that is designed for aviation professionals. It also does not contain information about specific flight routes or airports that have been affected.

To provide a broader user segment with information in a more user friendly format, regarding volcanic ash eruptions and current distribution within the air space of volcanic ash cloud particles, a mobile application was developed (called Ash Cloud Impact). The mobile application furthermore gives the users a future prediction based on scientifically validated forecast models. The eruption and forecast data are visualized as dynamic simulations overlaid as a new layer on top of a Google maps background. The application furthermore contains a database over all the volcanoes existing across the world, and their last eruption date. The application also gives the user the possibility to add his/her flight schedule and visualizes the simulated flight across the map simultaneously with displaying the simulation showing the current location and forecasted prediction movement on the map layer.

The underlying ash cloud distribution and forecast data is provided by ZAMG and NILU (resulting from the ESA funded project VAST, where S[&]T also was a partner).

There are no similar applications available today, that serve its users with this combination of services within a single application. 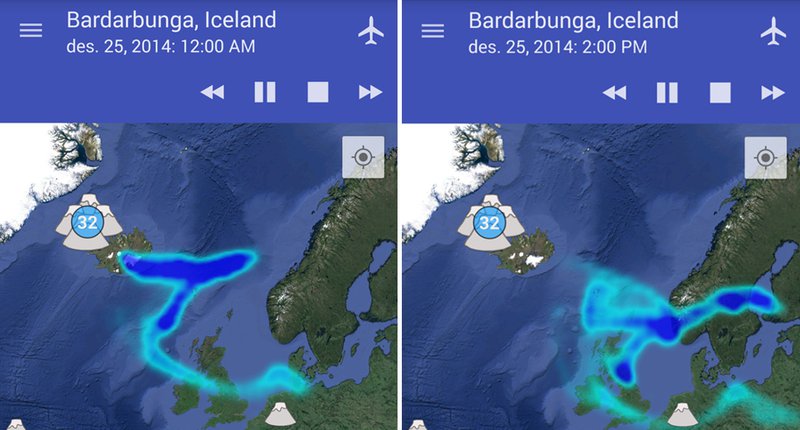